Today’s article comes from another founding father of TathaGat, Mr. Kumar Abhishek, popularly known as ‘Kumar’ and hands down the best verbal instructor in Delhi. Though he is great fun in his classes, he is a terror if you cross his rules, i.e. forget to submit your weekly book reviews, come without flashcards or The Hindu newspaper in the class, or arrive late for your class. But if you follow all that, you would forget about the time during his classes. He regales the students with his command in both Hindi and English. To quote a student “kumar sir is tough only in the first few classes……then it’s a smooth ride……and keeps the mood of the class light and interactive with his wisecracks and sudden outbursts of unadulterated hindi….like “mera abir balak kahan hai”………and “yatharth ka dharatal”……..”prabal sambhavana” and many more…” For those who would like to know, his favourite words are “Bhasad” and “Hawabaz” which he can be seen quoting once in every 5 sentences. Even his fan club on TG Town is known as ‘Bhasad’. Not to mention that he is extremely famous among his students. Once we were so full of reading his praises on the internet that we started pulling his leg “Aap hi to kahin jakar nahin likhte rahte hain internet par apne bare mein?”

Shut Up and Read 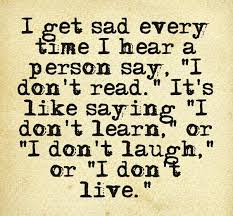 Shut Up and Read

Some of us have grown up with books. Some of us haven’t. Some of us have even had an allergy to books. They gave us the rashes. They made us want to throw up. They made us want to eat the pages in desperation. And then there was the internet. We smile when we read the word “internet”. There are so many “fond” memories we have with the internet. We were happy. Utterly comfortable. In fact, we still are. But mention “books”, and we shiver. Grimace. Frown. Scowl. Glower.

The passage given below is followed by a set of questions. Choose the best answer to each question.

In what relation The Apology of Plato stands to the real defence of Socrates, there are no means of determining. It certainly agrees in tone and character with the description of Xenophon, who says in the Memorabilia that Socrates might have been acquitted ‘if in any moderate degree he would have conciliated the favour of the dicasts;’ and who informs us in another passage, on the testimony of Hermogenes, the friend of Socrates, that he had no wish to live; and that the divine sign refused to allow him to prepare a defence, and also that Socrates himself declared this to be unnecessary, on the ground that all his life long he had been preparing against that hour. For the speech breathes throughout a spirit of defiance; and the loose and desultory style is an imitation of the ‘accustomed manner’ in which Socrates spoke in ‘the agora and among the tables of the money-changers.’ The allusion in the Crito may, perhaps, be adduced as a further evidence of the literal accuracy of some parts. But in the main it must be regarded as the ideal of Socrates, according to Plato’s conception of him, appearing in the greatest and most public scene of his life, and in the height of his triumph, when he is weakest, and yet his mastery over mankind is greatest, and his habitual irony acquires a new meaning and a sort of tragic pathos in the face of death. The facts of his life are summed up, and the features of his character are brought out as if by accident in the course of the defence. The conversational manner, the seeming want of arrangement, the ironical simplicity, are found to result in a perfect work of art, which is the portrait of Socrates – the man and his pedagogy.

Out of Context Questions for MBA Entrance Exams

Out of Context questions are known for their tendency to make you see identical stars (those in the picture are star sheep) in broad daylight!

Ready to mull over these?

1.
A. Entrepreneurs face the hassle of managing their taxes efficiently.
B. Some entrepreneurs have sought professional help to manage taxes.
C. Obscure regulations have the capacity to throttle most entrepreneurs.
D. Startups have constantly identified quality of labor as a pertinent challenge.

1.
A. It conceived of the gods as blissful and immortal, yet material, beings made of atoms, inhabiting the empty spaces between worlds in the vastness of infinite space, too far away from the earth to have any interest in what man was doing.
B. In modern popular usage, an epicure is a connoisseur of the arts of life and the refinements of sensual pleasures, especially of good food and drink, attributable to a misunderstanding of the Epicurean doctrine, as promulgated by Christian polemicists.
C. It can be argued that the philosophy is atheistic on a practical level, but avoids the charge of Atheism on the theoretical level, thus avoiding the fate of Socrates, who was tried and executed for the Atheism of his beliefs.
D. Epicureanism emphasizes the neutrality of the gods and their non-interference with human lives, although it did not deny the existence of gods, despite some tendencies towards Atheism.
1. DACB        2. ABDC        3. BADC        4. DBAC

Click here to see the solution.
Solution: 1. D and B seem to be the contenders for the opening sentence. 2 is ruled out. However, A cannot follow B as “it” in A has no antecedent in B. Thus, 3 is ruled out. 4 is ruled out for the same reason as A follows B, whereas A should directly follow D as the “it” in A refers to Epicureanism. Thus, 1 is the best sequence.
Read More

The passage given below is followed by a set of questions. Choose the best answer to each question.

As I said before, I do not think that the real reason why people accept religion has anything to do with argumentation. They accept religion on emotional grounds. One is often told that it is a very wrong thing to attack religion, because religion makes men virtuous. So I am told; I have not noticed it. You know, of course, the parody of that argument in Samuel Butler’s book, Erewhon Revisited. You will remember that in Erewhon there is a certain Higgs who arrives in a remote country, and after spending some time there he escapes from that country in a balloon. Twenty years later he comes back to that country and finds a new religion in which he is worshiped under the name of the “Sun Child,” and it is said that he ascended to heaven. He finds that the Feast of the Ascension is about to be celebrated, and he hears Professors Heroditus and Panopticon say to each other that they never set eyes on the man Higgs, and they hope they never will; but they are the high priests of the religion of the Sun Child. He is very indignant, and he comes up to them, and he says, “I am going to expose all this humbug and tell the people of Erewhon that it was only I, the man Higgs, and I went up in a balloon.” He was told, “You must not do that, because all the morals of this country are bound round this myth, and if they once know that you did not ascend into Heaven they will all become wicked”; and so he is persuaded of that and he goes quietly away.

Read the passage given below and answer the questions that follow:

There is nothing easy about the adoption of cloud computing. It demands new information-technology (IT) and developer skill sets. It also challenges organizational structure and work practice. But that does not mean, as Bruce Schneier says, that “it’s complicated” or a “maybe”. Companies should make the adoption of the cloud a strategic imperative because it is a vastly superior way to deliver reliable, secure, scalable computing—which is needed to fuel business.

Mr Schneier highlights the potential risks of the cloud, but fails to account for the risk of not adopting it. Businesses exist to deliver value while managing risk. And the broad adoption of cloud computing will dramatically decrease risk and offer incredible opportunities to firms that seek competitive advantage. Mr Schneier neglects to mention the manifest risk inherent in the status quo: a legacy mindset born of well-founded fears. Today’s IT infrastructure is a Swiss cheese of vulnerable networks, operating systems and applications developed before the internet. It is difficult and expensive to keep running—and easy to penetrate. In 2014 Verizon reported more than 2,100 data breaches. The FBI has claimed that every major American company has been compromised by the Chinese—whether they realized it or not. Against this backdrop, it is rational for IT staff to seek greater control by locking down networks and computers, and by prohibiting the use of the cloud.